By Adnan Khan Tensions have reached unprecedented levels in the Asia-pacific region, ever since North Korea tested a long range rocket in December 2012, which put a satellite into space. Subsequent sanctions by the UN led to North Korea conducting an underground nuclear test on the 12 February 2013, its third in seven years. This resulted in fresh sanctions on Pyongyang by the UN and set the stage for aggressive statements and actions by both...
11th April 20135 min 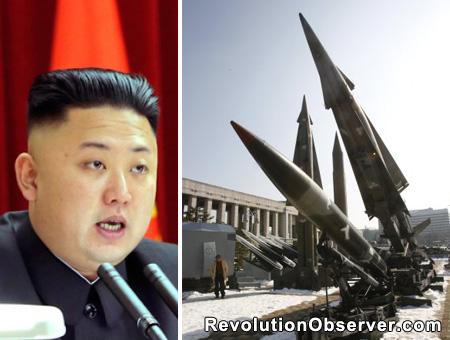 By Adnan Khan
Tensions have reached unprecedented levels in the Asia-pacific region, ever since North Korea tested a long range rocket in December 2012, which put a satellite into space. Subsequent sanctions by the UN led to North Korea conducting an underground nuclear test on the 12 February 2013, its third in seven years. This resulted in fresh sanctions on Pyongyang by the UN and set the stage for aggressive statements and actions by both Washington and Pyongyang. Events have now escalated with the US dispatching two additional destroyers to the region, as well as sending missile defense units to Guam. North Korea reciprocated by scrapping the Korean War armistice, threatening to attack both the US and South Korea with military strikes and declared it has entered into a state of war with South Korea.
The aggressive statements by the North Korean leader Kim Jong-un led to the US escalating tensions through a number of provocative actions in its annual US-South Korea military exercises, which included the dispatch of a pair of nuclear-capable B-2 stealth bombers on a training mission over the Korean peninsula. US officials described this as a way of underscoring the US commitment to its longstanding regional allies, Japan and South Korea. This is a departure for the US who usually calls for calm when North Korea ratchets up aggression and in the past has almost always called for talks to defuse tensions. On this occasion the US responded to each North Korean provocation with a stronger signal of its own.
The US signed a new military agreement with South Korea that will see more US troops on the Korean peninsula due to provocations by North Korea.[1] “This allows both nations to jointly respond to the North’s local provocations, with the South taking the lead and the US in support,” Kim Min-Seok said. “It will have the effect of preventing the North from daring to provoke us.”[2] The existing agreements between the US and South Korea allow for US intervention should a full-scale conflict break out. There is no provision for support in the case of a low-level incident, which is what takes place most of the time. The US provoked North Korea in order to bolster its presence in the region and increase its military footprint as it continues its ‘pivot’ to the Asia-Pacific. This is why Obama reiterated: “Washington has an obligation (to) defend the homeland (and) reassure South Korea and Japan that America’s defense commitments remain firm.”
North Korea has followed suit and continues to increase aggressive and unpredictable behaviour giving the impression that it is capable of doing anything, including using nuclear weapons, all in the hope of winning concessions at the negotiating table. With each provocation from the US, North Korea reciprocated with more saber rattling. With the US pivot to Asia in full swing more and more US military hardware is making its way to the region and the official justification for this is North Korea.
Since North Korea began conducting nuclear tests, the US position has been that Pyongyang should immediately stop as this is not favorable for regional peace and security. In 1994 an agreement was reached between the US and North Korea regarding North Korea’s nuclear reactors. This agreement called for North Korea to bring to halt its nuclear programme and shut down its reactors. This was in exchange for the US supplying two light-water type reactors. But the US failed to honor its part of the promise and North Korea resumed its nuclear activities. This has been the case ever since, the US offers a range of promises which do not materialize so North Korea continues with its nuclear programme.
The North Korean Nuclear weapons stand-off with the US is a direct result of US attempts to contain China. Ever since North Korea began conducted nuclear tests both China and the US have pursued multilateral talks, but both nations are looking achieve different objectives. China has worked for the reunification of North and South Korea, whilst the US has acted as an obstacle to this. The statements from such meetings have been contradictory where China has been pessimistic about the talks with distance on most issues whilst the US has continually remarked successful negotiations. As one policy paper: outlined “These U.S. troops are in the region not simply to fight the “terrorist groups” causing local instability, but to enhance U.S. military control over territory in the South China Sea. This strategic area with vast potential oil reserves sits aside the shipping lanes to the Middle East and offers access to much of Southeast Asia. The expanded U.S. presence and nascent military alliances with Southeast Asian nations exacerbates Chinese anxieties and impedes independent accords among Asian states through such mechanisms as the ASEAN Regional Forum.”[3]
The US has already begun calming matters. The visit of Indian Joint Secretary and Head of East Asian Affairs Gautam Bambawale to Pyongyang, which was conducted in secrecy, suggests a process of de escalation is afoot. Stratfor outlined his visit did not follow normal protocols and appears to have been planned within the last week or so. Stratfor believes Washington may have pushed for Bambawale to visit North Korea, in advance of his April 15 visit to Beijing, to help defuse the situation on the peninsula. Soon after this visit the US has confirmed it will delay the test of its intercontinental Ballistic missile (ICBM) in order to defuse tensions.[4] Although the rise in tensions in the North Korean crisis are from the recent long range missile testing they can also be seen in light of the fact that North Korea carries far reaching implications amongst the leading nations, its crucial positioning in the area proves to carry great geopolitical vantage especially to those intended on spreading their influence in the region.
[1] http://www.dw.de/south-korea-us-sign-new-deal-to-deter-norths-provocations/a-16696675
[2] http://www.dw.de/south-korea-us-sign-new-deal-to-deter-norths-provocations/a-16696675
[3] http://www.fpif.org/articles/the_us_war_on_terror_and_east_asia
[4] New Delhi’s Outreach to Pyongyang | Stratfor
previous