By Adnan Khan Exactly two years ago in March 2011 a number of young boys under the age of 15, were arrested in Dar’aa, Syria, for writing on the walls of the city: “the people want to overthrow the regime.”[1] Dar’aa erupted along with the rest of the country, many took to the streets after the ritual Friday congressional prayers in a ‘day of rage’ – the Arab spring had officially arrived in Syria. The...
11th March 20137 min 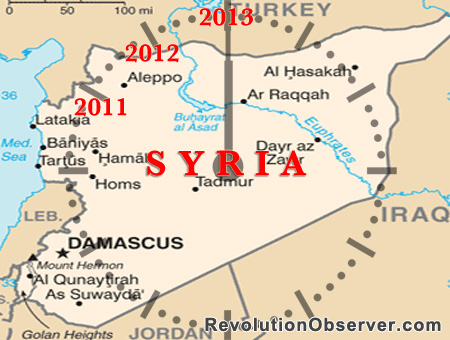 Exactly two years ago in March 2011 a number of young boys under the age of 15, were arrested in Dar’aa, Syria, for writing on the walls of the city: “the people want to overthrow the regime.”[1] Dar’aa erupted along with the rest of the country, many took to the streets after the ritual Friday congressional prayers in a ‘day of rage’ – the Arab spring had officially arrived in Syria. The al-Assad regime, not surprisingly, responded in a brutal fashion. On the second anniversary of the Syrian uprising and after 1 million refugees[2] and more than 70,000 recorded deaths,[3] the battle for Syria continues as the US and Britain announced their selective arming of the opposition[4] and with the rebels capturing the capital city of the al-Raqqa governorate.[5]

Despite decades of persecution the people of Syria banded together and threw away their fear of the regime and began the process of toppling the regime. Facing a conventional force, with more weapons and capability, the people organized into rebel units and faced off against the regime across the country. Given a nationwide insurrection the regime decided to fight everywhere simultaneously, stretching regime forces thin. This allowed rebel units to cut regime supply lines and subsequently capture areas around the main cities, allowing them to then launch sustained assaults on major cities and targets. This strategy most recently led to the capture of major parts of Aleppo, of al-Raqqa, and more importantly the fall of the country’s second largest air base – Taftanaz. As of now al-Assad’s forces are surrounded in the North of the country and have ceded the East of the country.

Bashar al-Assad’s strategy rested on using overwhelming force to subdue the uprising. Homs witnessed the worst sieges by regime forces, The Homs neighborhood of Bab Amr has seen three sieges in two years and has been compared to Fallujah in Iraq. This strategy resulted in large convoys of tanks and armored personnel carriers (APCs) conducting missions across the country. However the guerrilla tactics of the rebels led to the loss of many supply lines and forced the regime to re-supply forces from the air. The regime came to rely on its military and air bases to conduct missions to halt the uprising, and this forced it to lose significant territory through prioritizing operations due to its limited resources. In this way the regime lost the entire countryside to the rebels and currently maintains a tenuous supply line to the north of the county. As of now, regime forces have fallen back and entrenched themselves on the coast and the capital, Damascus, for what will in all likelihood be the end game.

The position of the international community has constantly shifted based on the changing developments on the ground. Initial calls by both the US and Britain were for al-Assad to be given time as he was a reformer.[6] This eventually gave way to the creation of a group of secular exiles in the form of the Syrian National Council (SNC). Their failure to gain any influence on the ground led Hillary Clinton to announce the formation of a new group of loyalists in the form of the Syrian National Coalition. As the Islamic minded rebel groups overran much of Aleppo this worried the West and they began to arm selectively to other units in order to drive a wedge and weaken the opposition. The New York Times reported: “The weapons’ distribution has been principally to armed groups viewed as nationalist and secular, and appears to have been intended to bypass the jihadist groups whose roles in the war have alarmed Western and regional powers.”[7] The West’s current position was encapsulated by Britain’s foreign secretary, William Hague, in a speech to the parliament: “We are increasingly concerned about the regime’s willingness to use chemical weapons. We have warned the Assad regime that the use of chemical weapons would lead to a serious response from the international community.”[8] Until then he is free to put an end to the uprising in anyway necessary.

On the second anniversary of the uprising, rebel forces have been able to carve out large areas in the North and East of the country and to organize a sustained assault on Damascus. The main ring road around Damascus has moved between rebel and regime forces several times in 2013. The post al-Assad scenario is being dominated by Washington and London, who are now arming select secular units to ensure they emerge victorious after the fall of al-Assad. What has worried them is the success the Islamic minded units have had in not just capturing territory but conducting governance. One of the reasons Jabhat al-Nusra has been the most successful rebel unit is its ability to control and secure supply lines in order to provide basic goods and services in territories under its control. It has successfully secured important state infrastructure such as hydroelectric dams, grain factories and oil fields.

As we look on the endgame in Syria is well underway. Bashar al-Assad has lost a lot of territory, and the only remaining question is where he plans to make his last stand. The most important questions for the rebel groups pertain to the shape of their future state, will it be Islamist or Secular; the integrity of Syria’s territories, will the Alawites and the Kurds be able to carve out their own independent cantons; and the actual independence of Syria, whether Syria will be able to break away from foreign influence in all political, economic and military aspects. The sacrifices made in this revolution are enormous, and the stakes are high for the people of Syria and the entire region and thus must be the outcomes of the revolution.

Who's who in Syria's opposition?