By Adnan Khan Mohammed Mursi President of Egypt faces yet another challenge as the head of state. November 2012 has been a difficult month for the Egyptian premier as he continues to battle multiple elements of the country’s fractured political system. Ever since assuming power as president of Egypt in June 2012, Mursi has worked to consolidate his position in the face of stiff opposition. On 22 November, Mursi issued a presidential decree that limited...
14th December 20125 min 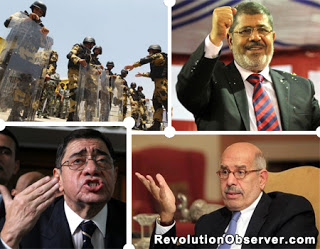 Mohammed Mursi President of Egypt faces yet another challenge as the head of state. November 2012 has been a difficult month for the Egyptian premier as he continues to battle multiple elements of the country’s fractured political system. Ever since assuming power as president of Egypt in June 2012, Mursi has worked to consolidate his position in the face of stiff opposition. On 22 November, Mursi issued a presidential decree that limited the powers of the judiciary by ruling the president’s decisions were “final and unchallengeable by any individual or body until a new constitution has been ratified and a new parliament has been elected.“[1] This led to a tense standoff with the secular opposition.
The first center of power is the Egyptian military. The army’s disproportionate influence and its interference in running the country weakens the President. Since the ouster of Mubarak, the army has left the day-to-day running of the country to the government, it has however maintained its grip over Egypt’s relations with the US and Israel. The current constitutional crisis has seen the military stand aside letting events unfold. The decision of the military to refrain from assisting Mursi shows where the power really lies. A Wall Street Journal report predicted in May that the army would not relinquish its upper hand over foreign policy, which includes Egyptian relations with the US, the provider of an annual military assistance to Egypt. It went on further to highlight the army’s actions in protecting its budget from public scrutiny and parliamentary accountability.[2]
The second center of power is the judiciary. The judiciary and Mursi have been at loggerheads since he became President. Prior to becoming President, the Muslim Brotherhood’s (MB) Freedom and Justice Party (FJP) won half of the seats in parliament. The constituent assembly was to be formed from the parliament to write the constitution. The Supreme Administrative Court, stacked with judges from the Hosni Mubarak era, has a history of bogus rulings. It upheld a decision to dissolve the entire lower house of parliament on a technicality. The reason being the domination by Mursi’s fellow members of the Muslim Brotherhood. What emboldened the Mubarak-era judges was the army’s silent but implicit support of their judgments. With the judiciary constantly ruling against the executive, it rendered the executive irrelevant in changing the Egyptian political landscape. Mursi’s decree curbs the judiciary’s powers.
The third center of power is the executive itself. Since taking office, Mursi has worked to consolidate his power while navigating through the myriad obstacles placed before him. The election in which Mursi emerged victorious took place in an environment where the powers of the president were not defined and the nation’s constitution had not been written either. Mursi’s attempts to change this has been through the Mubarak-era constitution and laws. The November 22 decree was the second attempt at sacking the prosecutor general Abdel-Maguid Mahmoud. In it Mursi also assigned himself powers over the legislative and executive branches and gave his decisions immunity from the courts.
The fourth center of power is the secular groups, who see themselves as the flag bearers of the January 2011 revolution that toppled Mubarak. The parliamentary elections in June 2012 led to 75% of the seats going to the Islamists; MB and the Nour party. The secular parties failed miserably. The current protests are being led by the secular groups who lost out in the initial parliamentary elections. Compared to the Islamists these groups have smaller popular support even though they were able to harness social media very well. Their ability to mobilise some of their supporters onto the street leading to demonstrations and ransacking offices makes them a power that needs to be dealt with sensitively. They have attempted to gain concessions from Mursi and when concessions were not forthcoming they asked for more. Ahmed Said, a liberal leader of the main opposition National Salvation Front, said Mursi’s withdrawal of his November 22 decree had not annulled its consequences, describing the race to a referendum as “shocking” and an “act of war” against Egyptians.[3]
Without a constitution or a grand plan for the nation, Mursi has been forced to compromise on all- most all of his proposals in order to placate the army, secular groups and judiciary. The current constitutional crisis has strengthen Mursi’s opponents who see an opportunity to weaken him and gain concessions by undermining his rule. The army has backed Mursi’s opposition by remaining on the sidelines. Whilst Mursi annulled his decree on 9 December 2012, the opposition continues to call for the referendum on the constitution to be cancelled altogether.
As Egypt’s uprising approaches its second anniversary, much of the old guard from the Mubarak era continue to hold the whole country to ransom for their own agenda. The secular groups, who gained much global media attention when they worked to overthrow Hosni Mubarak, have little support on the ground and as a result are utilizing every opportunity that comes their way to weaken Mursi and strengthen themselves. Whilst this crisis has been framed as those for an Islamic constitution squaring off against those for a secular constitution, this is a false dichotomy as Mursi’s rushed constitution lacks any Islamic content, whatever the rhetoric from the government in Cairo.

Secrets of the US-Syrian Relations