By Adnan Khan On July 16, 2013 the British government released its review on trident – its nuclear missile system. With this ageing and expensive platform, Britain has struggled to remain a member of the exclusive nuclear weapons club. Weaponizing the atom remains one of the most challenging endeavours any nation can undertake. 69 years after the US remote tested the world’s first atomic bomb, only a handful of nations have successfully developed a nuclear...
13th September 20136 min 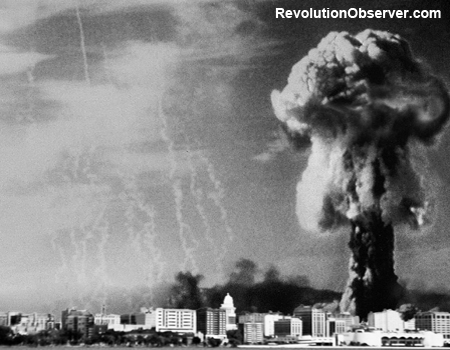 By Adnan Khan
On July 16, 2013 the British government released its review on trident – its nuclear missile system. With this ageing and expensive platform, Britain has struggled to remain a member of the exclusive nuclear weapons club. Weaponizing the atom remains one of the most challenging endeavours any nation can undertake. 69 years after the US remote tested the world’s first atomic bomb, only a handful of nations have successfully developed a nuclear weapon.[1] From amongst the Muslim world only Pakistan has overcome the technical challenges of developing a nuclear weapon, and Iran continues in its endeavours. Today, various myths exist with regards to such weapons systems such as nuclear proliferation, terrorist groups acquiring a crude nuclear device or rogue elements in unstable countries getting their hands on nuclear weapons. With this in mind this article debunks 4 common myths with regards to nuclear weapons.
Contrary to their popular portrayal in Hollywood, nuclear bombs are actually both difficult to manufacture and challenging to effectively deploy, making it virtually impossible for terrorist groups to acquire them. Nuclear devices initiate nuclear chain reactions, and these reactions generate roughly a million times more energy than comparable chemical reactions. The enrichment of Uranium is probably the most complex aspect of building a nuclear device; It presents numerous challenges for any nation in developing a nuclear programme. The concept requires separating a heavier isotope (atoms of the same element having a different number of neutrons) of uranium from a lighter isotope of uranium in order to enrich or purify the stock to higher than 80% of U235 – sufficient for use in weapons. Achieving this separation on a suitably refined level differentiated by only a few subatomic particles is an extremely complicated process. A series of centrifuges carry out the delicate task of separating isotopes, these are finely tuned machine components, able to spin at high speeds while fully containing and separating highly corrosive gas. It is the combination of appropriate calibration and rotational speed that allow for enrichment to take place, low-quality bearings just would not do the job. Thereafter fabricating fissile material and developing either a gun-type device or implosion device is a process only 9-10 nations in the world have accomplished. South Africa has since renounced it, whilst North Korea is still working on it.[2]
Today nuclear warheads sit in missiles and this would be another challenge any nation would face, i.e. delivering a bomb to its intended target. The components of the bomb that actually initiate a nuclear explosion must be miniaturized in order to be placed in a missile. Modern missiles are smaller than a human being weighing only a few hundred pounds. Actually getting a warhead down to this size is no simple exercise. It requires, among other things, precision manufacturing, exceptional quality control and a good understanding of nuclear physics. All of this would be after decades of testing to ensure detonation upon delivery. Building a Nuclear weapon requires a comprehensive commitment from any nation for its national resources to be deployed in such a manner. It is not just about one facility, it needs an industrial base. A nuclear program requires long term facilities, which are very energy intensive, years of experimentation, fissionable material and high grade industrial machinery. All of this is beyond most countries let alone terrorist groups. In the case of al Qaeda, even after immense security, sanctuary and financial backing they have been unable to produce a crude nuclear device in any meaningful way.
The US has long lamented the possibility of rogue elements in Pakistan or Iran taking over the countries’ nuclear weapons.[3] The leaders of these countries could possibly hand over a nuclear device to a terrorist group, and as such Iran’s support for Hezbollah and Hamas has for long alarmed the West. Pakistan has also been under the microscope as many in the West consider rogue elements exist within Pakistan’s secret service (ISI) and the army. Elements within such nations could place a nuclear device into the hands of terrorists in order to fulfil their national aims. A nuclear device is the product of an immense and expensive national effort. Each individual weapon, especially early on, becomes a national strategic weapon. By handing one over to an outside group, the country not only has no assurance of it being employed in the way they want, but opens itself to the prospect of that immense investment being wasted or misused. Because a meaningful nuclear deterrent rests on not one weapon, but many, the incentive will be for the country to consolidate its stockpile and deploy it to multiple locations that it has strong control over in order to work towards establishing that deterrent.
Nuclear weapons are largely a political issue, as possessing them gives a nation strength in global issues, and any nation with designs on such a nation would need to think twice about the repercussions. The political strength they afford a nation is very significant as such a nation would need to be taken seriously on the international scene. This is why Britain is attempting to maintain its nuclear arsenal, despite a lack of resources, as without them it would not even be considered a serious power in the world.  Pakistan continues in modernising its nuclear arsenal, while Iran continues in its attempts to enrich Uranium.
Security doctrines are built around preparing for the worst case scenario, incorporating all potential threats. The threats nations around the world face differ in size and capability. Nations are forced to develop weapons system to take account of this, even though they may never be deployed. Current trends in warfare point towards asymmetric threats by non-state actors, cyber threats, and even pirates hijacking ships, hence making national defence is an ever more expensive endeavour.[4] In the case of Britain its missiles are leased from the US, as are its warheads, hence its nuclear deterrent is not even independent. In essence, despite the destructive nature of nuclear weapons, they are fundamentally tools of political statecraft.
[1] http://en.wikipedia.org/wiki/Trinity_test
[2] http://www.fas.org/programs/ssp/nukes/nuclearweapons/nukestatus.html
[3] http://www.nti.org/gsn/article/what-us-could-do-if-pakistan-loses-control-over-nukes/

Understanding the U.S Strikes Against Syria